104: “Challenges of Running a PMO in the Public Sector” with Fergal Collins

In this episode we discuss the challenges of running and setting up a PMO in the public sector with Fergal Collins, Brexit Lead at Ireland’s Health Service Executive, the HSE.

Before taking on this role, Fergal established and ran the PMO for Tusla – the Irish Government’s Child and Family Agency, as well as working in several project management positions in Ireland’s Department of Health. Fergal is also an associate lecturer in project management at Carlow Institute of Technology.

This episode is sponsored by Cora Systems: Powering best-practice enterprise PPM is over 50 countries. Find out more at corasystems.com

Subscribe to Project Management Paradise via one of the links above or on the right and you’ll automatically receive new episodes directly to your device.

Transcript from Episode 104: “Challenges of Running a PMO in the Public Sector”

Can you tell us a little about your background and how you got into the project management space? 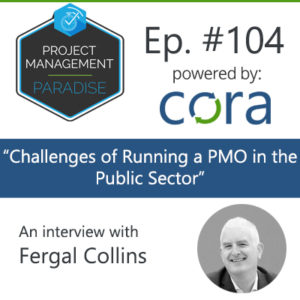 Can you explain for our international audience, a little bit of what Tusla does and the services it provides and what types of programs work that Tusla manages?
Tusla was established about five years ago and it looks after all family and child welfare issues in Ireland. So, we get about 60,000 defers into the agency every year and we deal with those, social workers deal with those. We ought to look after adoption, the information, tracing, education, and the welfare support at schools. So it is quite broad, about four and a half thousand staff over 380 locations around Ireland.

It turns out that programs and projects in the project management office, there is a huge transformation program in Tusla over the last three years. Programs vary from ICT programs, new HR strategy, new ICT strategy, all the way down to minor empowerment projects, then all the way back up to large scale transformation programs. So, about 45 programs running in the PMO and over time, there were over 400 projects in total.

What is involved initially in setting up a PMO from scratch and from taking a paper-based operation system into a technological project management system?
First of all, we must establish what is the methodology we are going to use. We use a  kind of a blend of PMI and PMD approach. Agree that methodology with senior management and also with the established project management committee. So we set up a project management methodology to management framework. And then we basically put all the various programs in the project into that structure and seeing where they stood and we didn’t go back and try to retrofit any programs or projects that are already underway or fending new that came on board with caution place to the templates, to ensure that they follow the structured approach.

There was no IT system when we started, so we got an IT system quarter PPM to manage all that for us and we were dealing with project management programs right across Ireland. I need to go to work remotely to get our updates and upper reporting in place. And again everything was involved with the senior management team so that they were brought on board and they were getting the reports and information that they needed.

So, in gathering, creating, and presenting all that information across all of those programs you used the IP system, the Cora PPM, how beneficial was that in centralizing that data?
It was crucial, it was absolutely essential and given the large scale projects that we were trying to monitor and report on, there were a lot of different stakeholders that we were reporting uptown, reporting up to and into a department, etc. It was absolutely crucial for information to be in the same format and consistency across various programs and projects so that we get the true picture of the work going on and using Cora PPM it allowed us to do that.

It allowed us to track risk and issues, it allowed us to keep the various scans up to date, but basically, it allowed us to roll off or roll down various courses of projects, to see where we are at in any given point in time. It was absolutely a key, we wouldn’t be able to manage it without it, to be honest.

What are the benefits did you garner from using that single PPM implementation system in maintaining control and governance?
In the PMO team, there are seven program managers and they are basically spilled all around the country, so they will be involved or responsible for various roles in projects. We are able to use the system to get them to import their information in a consistent way that did not have them all travelling to Dublin every week to give updates. We are trying to push various updates in over the phone or whatever, typically fed into the system and then I was able to monitor, to control that centrally. We had conference calls with them.

By having one system that was available to them all nationally made it so much easier to gather information, the real-time information, information that wasn’t a month, two-month three-month outdated that needed to be validated. Actually, I could run a report the morning I am going to a management team and get the latest update on the particular program or project knowing that it was up to date.

Within our Dublin office, we had the number of admin support, support in the program management around the country and we run a lot of checks to ensure when was the last risk and issues updated, to see that on the system if it is a couple of days out of date, can a project manager get it up to speed and to pull those real-time reports, which is what the senior management want, what the team wants, especially given the nature of Tusla, and it could be subject to the minister approving this program. It was crucial that the system was up-to-date as it could be because we could get a request from the Minister of Children and Youth Affairs to say – I need an update on program projects where is it at and we need to pull that information quite quickly together to see where the project was at.

When you installed a PPM solution to manage this whole transformation program and put it all under the one umbrella what were the major issues and headaches that you encounter with that number of staff in Tusla, the variety of locations and centralization of data?
What we did when we were starting off is that we rolled the system out within the PMO initially so there is a team of 14 there initially. And we got all the programs and projects upon the system and then basically what we did from there was to reach the programs and projects we identify the program needs or a project needs from the business and we got them basically a license, got them trained up on the system and got them using the system.

And we’re putting, roughly 25 people a year to go through that project management training course so they were people who haven’t done project management before, but we will be running projects through their units. Basically, the plan is over a number of years that number will grow and grow and PMOs and then basically get the core PM and use of the information and everything that goes with it. We started smaller and then it kind of rolled out.

Since you are a lecturer in project management, have you ever had a good challenge from the student as to how you would implement a project management system or methodology?
The course I teach is in Carlow IT and it tracked a broad range of people coming back into education. I try to bring in real life examples into my lectures to make it real to people. And we get students from India, we get students from all across Europe. But certainly, a number of students have come to me and said: “Look, I’m rolling out this change program within my organization.”

There was one particular organization in Carlow that would look into basically a scale of the particular project they were doing. They were developing a particular piece of equipment that was used in the horse industry. So they have used my experiences and taken my experiences and what I have done, but also taken the strong programmatic approach in terms of how they rolled out the project. And that particular project was a success and actually, the company then benefited to the tune of the project and the company developed hugely in Carlow. That was a bit of a success story.

Can you explain maybe a little bit about the nature of the Brexit Lead, Health Service Executive position? In these uncertain times, with Brexit, what kind of risks and issues will you have to prepare for?
HSE has been preparing for Brexit since 2016 since the initial announcement and I basically came on board to manage all the current risks and issues that basically we feared. So there’s a very large number of those and we have to work through them. We have come up with many different scenarios as possible and it’s quite uncertain at the moment. But we are gaining two scenarios. One, the centralized case, which is that we exit the EU and we are looking at the crash. It is difficult to plan. There’s a large number of people involved and impact on the HSE is absolutely huge. Of course, we are just following a very strict risk profiling and issue management and hopefully, all the planning will pay off.

Do you think that you will be able to link across any of your projects and programs and are you currently linking across the whole organization?
There is a number of PMOs that have been established across the agency to roll out various change programs for ongoing and I’ve already linked it with the head PMO basically, so that they can basically use the tools that are using, Project Vision, to ensure that the risks that we are recording are recorded in the same way across the organization. So that there is consistency in language across the approach.